Hello! I am the founder and director of On Bright Wings. I am a Certified Thanatologist (death and grief specialist) and trained End-of-Life Doula, Registered Drama Therapist (and Board-Certified Trainer), Certified Dementia Practitioner, Grief Support Specialist, and Advance Care Planning Facilitator. I work in your home and in hospice and facility settings with people who are grieving, aging and/or at the end of their lives. At bedside, I use a unique blend of Drama Therapy with other creative arts methods, and End-of-Life Doula techniques, such as reminiscence, legacy work, and therapeutic guidance through suggested topics designed to attain peace and acceptance at the end of life. I have presented my work in classes and conference workshops all over the United States, England, and China. 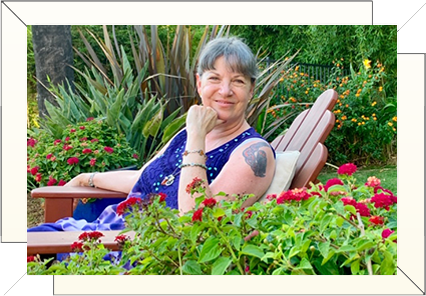 From the Seasons Hospice and Palliative Care newsletter:


He was already in the process of dying when I arrived. He was lying in bed alone, breathing like a fish out of water, mouth open and unconscious. I greeted him, tidied his space and began playing the soothing songs of Threshold Choir on my iPad for him. “You are not alone, I am here beside you…Rest easy…”–these are songs written specifically to be sung at the bedside of the dying, very soothing and comforting. I placed 3 of hospice nurse Barbara Karnes’ booklets, “Gone From My Sight”, “The Eleventh Hour”, and “My Friend, I Care: The Grief Experience” on the bedside table for the family. Then I settled in beside him.

His son, a chaplain, stopped by. I suggested he read some suitable Bible passages aloud to his father, and I sat with him. Later, his daughter arrived. She was upset by his appearance and how he was breathing. I assured her that he wasn’t in pain, and asked her to share some memories of her father. Laughing through tears, she told me about the “best Dad” anyone could have had. I agreed that she was very lucky. I encouraged her to talk to him, and she did while stroking his arm.

Later, after he died, I sat with his wife. Her face was blank and tearless. “I guess I’m a widow now. I never thought I’d ever be a widow.” I brought her a basin of warm water, put some lavender oil in the water, and handed her a washcloth. “Would you like to wash his face?” Hesitating, she nodded, dipped the cloth in the water and smelled her hands, taking in the soothing aroma of the lavender. Then, so tenderly, she washed his face and the tears began to fall. When she was finished, she thanked me. “That was more comforting than I expected.” I stayed near as the family said their last goodbyes.

Sitting vigil is the greatest privilege and responsibility I have as a Death Doula. I create and hold the sacred space my client needs for life’s last rite of passage. It is a holy time. I am also a guide: directing, reassuring, and comforting a family who is grieving and frightened by what they are witnessing. I make it safe and meaningful for them, too. I come away from the experience filled with a profound sense of life and death being part of the same mystery, and I appreciate the experience of living so much more vibrantly because of the death I have just witnessed.

The reality is that you will grieve forever. You will not 'get over' the loss of a loved one; you will learn to live with it. You will heal and you will rebuild yourself around the loss you have suffered. You will be whole again, but you will never be the same. Nor should you be the same, nor would you want to.

Death is not waiting for us at the end of a long road. Death is always with us, in the marrow of every passing moment. She is the secret teacher hiding in plain sight. She helps us to discover what matters most. And the good news is we don’t have to wait until the end of our lives to realize the wisdom death has to offer.